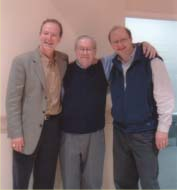 When I began studying with Vincent Cichowicz in September 1982, I was like many young players that I have since encountered in my own career. Some days I could play quite well and other days I was equally bad, and I didn’t have the slightest idea what made the difference. I am sure it was obvious to Cichowicz that on bad days (or even good ones) I was inhibiting or restricting my air flow. Like so many players would clamp down or negatively compress the air (not that all compression is bad, I have come to learn). Cichowicz taught me that the first note of a phrase must be released in a free and positive direction and how quickly things can turn ugly if it’s not.

Much has been made of Cichowicz’s concepts relating to air flow and his extensive use of flow studies. It was how he related to air flow to articulation that helped me the most in my career. He taught me that staccato tonguing can be an aural illusion. A string of sixteenth notes played with crisp articulation will sound like short notes, but the airflow remains constant. A good illustration of this is the rain bird sprinkler at a golf course. The water flows constantly as the arm bounces off the water stream. By keeping the air flowing in this manner one can tongue faster and do it for longer stretches.

The exercises Cichowicz prescribed for this particular ailment came early in my daily routine, right after flow studies. I would play scale patterns from the Williams scales book. The patterns consist of steady running notes. First, I would play them articulating every eight notes, then every four notes, then every two. Then, I would slur two notes and tongue two notes, then slur two, tongue six, etc. After that, he had me turn to the second part of the Arban’s Book, the double-tongue section, pp. 156-157, Nos. 101-104 (p. 177, Nos. 87-90 in the 1982 edition). Before playing each measure as written, I would play the rhythmic pattern on one repeated note ( See example). This exercise should be practiced single tongued and with a metronome. Each exercise adds one beat of sixteenths to the pattern. I found this a great way to make the staccato illusion happen.